- Average APR paid by a borrower for a fixed rate personal loan is currently 7.3%, whereas the representative rates advertised by leading UK lenders for the average loan value (of £9,000) ranges from 2.8% to 4.9%

- Many households pay more in loan servicing costs than initially expected, which costs UK consumers an estimated £204 million a year

A new report released commissioned by Shawbrook Bank produced by the Centre for economics and business research (Cebr) warns that borrowers do not understand APRs advertised for personal loans. The findings have led Shawbrook to call into question the widespread practice of using ‘teaser’ or ‘representative’ APRs in the loan industry to hook consumers into applying for a loan only to find that the actual rate they are offered at the end of the process can be more expensive.

The report surveyed 1,500 people who applied for a loan in the last two years and also draws on a wealth of data from across the consumer loans industry. * The findings show that unsecured lending to households is growing in scale and significance in the UK with the value of outstanding consumer credit reaching £209bn as of February 2018 compared to £196bn at the same point the previous year. As the market has steadily grown so too has lenders use of representative APRs to market personal loans. This has led to a widening gap between the interest rates being advertised and the interest rates actually being paid by consumers (see figure 1 Comparison of average APR on personal loans and average advertised APR for a £10,000 personal loan below). 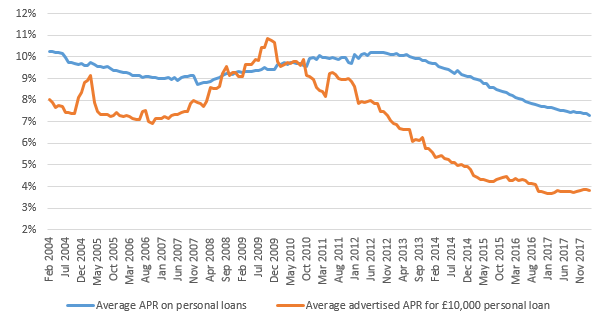 More than one in five (21%) successful loan applicants who were surveyed received an APR rate that was higher than the rate advertised, with an average difference of 2.4%. Based on the total value of loans issued in the UK over the last year (estimated to be £40 billion), Cebr’s analysis reveals this interest rate differential will have cost UK consumers £204 million.

The report released today finds that the effect of this discrepancy is two-fold. Firstly, it leaves many borrowers feeling misled by the process with the findings showing that nearly two thirds (63%) of loan applicants in the past two years feel dissatisfied with the way that representative APRs are currently being used to market personal loans. The vast majority of loan applicants (4 in 5 or 83%) expect to get the advertised representative rates while current rules dictate just over half (51%) are actually required by regulators to get them.

Secondly, the report highlights that this lack of transparency could have a negative impact on a borrower’s ability to make informed decisions about whether they can afford a loan from the outset of the application process. In some cases, this may mean people choose to apply for larger loans with higher repayments than they would have otherwise considered.

If not carefully considered this can have serious consequences and increase the likelihood of defaults and our figures show that defaults are a problem. Since Q1 2016 lenders have recorded an increase in default rates on unsecured consumer loans in eight of the last nine quarters meaning that accurate information from the outset of a loan application is more important to borrowers than ever before.

Paul Went, Product and Markets Director at Shawbrook Bank says:
“The conclusions from the Transparency Charter study are clear, so-called representative rates are actually unrepresentative of reality for too many borrowers and it has a negative effect on everyone. The growing scale and significance of the personal loans market means that it’s more important than ever to ensure loan applications are as transparent as possible for people. A widening gap between expectation and reality when it comes to loans is bad for all concerned.

Went continues:
“The research shows that many consumers feel that the marketing of loans is at best confusing, and at worst misleading. We believe that’s the wrong way to do things and two thirds of the prospective borrowers we spoke to strongly support that view. As a result, we are making a clear commitment to how we advertise and market our personal loans, and hope that this will lead other lenders to consider the approach they take. We have made five clear promises to ensure that people don’t feel misled when they come to Shawbrook.

Went concludes:
“We do not use misleading teaser or representative rates in advertisements. We will give you a quote for your guaranteed, personalised loan rate before you apply and ensure that we don’t put a mark on your credit file when you get a quote from us, so people aren’t penalised for shopping around. We will offer rates based your credit profile and won’t charge you more so that we can offer loss-leading rates to others. We will only lend to borrowers if it’s the right thing to do and will let you know whether you’ll be approved before you apply.”

To view Shawbrook’s Transparency Charter and its five promises to prospective borrowers in full visit: www.shawbrook.co.uk/transparency